I’ve censored the following, in protest of a bill that gives any corporation and the US government the power to censor the internet–a bill that could pass THIS WEEK. To see the uncensored text, and to stop internet censorship, visit: http://americancensorship.org/posts/29014/uncensor

This site has closed

Before the Holidays we posted we were moving content to Occupy!con.
The articles were moved by hand and are live. We made the move to decrease the confusion between OccupyGR.org and our site. If you are looking for Grand Rapids Michigan specific content, please use this link.

We wish you Peace on Earth and a Just New Year!

What I want for Christmas is a better world. I want greed, consumerism and the unrelenting devotion to climbing to the top of the pyramid to be replaced with cooperation, collaboration, and focus on our long term. I’d like corporations to be fundamentally structured for accountability and benefit to their workers, to their customers, to the overall effects of their operation.

I want war and hate to be replaced with respect and diversity. I want everyone to have the basics of life and a fair chance to grow beyond it. I’d like corporate media to hold an expectation of fairness before they label themselves as “News”. What I want for Christmas is an end to the political drama routine. I want to know that in a hundred years the rivers won’t be poisonous; that they will still be flowing for my grandchildren’s grandchildren to play in.

That’s probably a lot to ask Santa, so I guess I should just ask for something that might help me get all those things. What I really need for Christmas is a regime change. Not yet another round of rhetoric and politicians changing chairs, but to put me, as a citizen, in charge. I want democracy. I want this promised republic to be actually controlled by us, the People.

If I get this for Christmas, I’ll share it with everyone. I’ll share it equally too, but you’ll have to give me enough democracy to go around! With this Christmas present, I may never need to beg you for another toy or tool or to fix all of the problems beyond my reach, as benevolent as you’ve been so far.

We have a new name;

occupy: transitive verb
a : to take or hold possession or control of <enemy troops occupied the ridge>
b : to fill or perform the functions of (an office or position)
c: to reside in as an owner or tenant
icon: noun
b : a graphic symbol on a computer display screen that usually suggests the type of object represented or the purpose of an available function
We chose this naming convention to alleviate any confusion between us and the Grand Rapids Michigan occupy movement. We also admit to some subtle tongue-in-cheek . . . cheekiness.
The existing content on this site will be archived  by hand due to the  incompatabe export/import between the two blog platforms.  In the meantime, the new site is taking shape.
You can take a peek under the shiny paper here: occupyicon.blogspot.com.
There is also an exhaustive magazine format publishing a morning and evening edition with 40 journalists, photographers and videographers publishing an astounding 100 or more content items per day.
OccupyIcons magazine went live yesterday, December 11, 2011.
This site will be vacated by January 1, 2011.

Emergency Managers coming to a city near you

4 Comments Posted by vreedwrites on December 9, 2011

I make no pretense of journalistic neutrality;  I have a dog in this fight, ME an American citizen, resident of Michigan, The Great Lakes State. Proud granddaughter of a U.S. Navy Chief who served his country before and during WWII. Daughter of a woman who worked all her life to acquire medical benefits in the state of Michigan to sustain her in her retirement; those benefits are in jeopardy.

The Emergency Managers, unelected officials tasked by Governor Snyder, have the power to assume control of any city or school district in Michigan so deemed near insolvency, regardless of plans in action to resolve financial problems. Those powers granted to the Emergency mangers include but are not limited to; disbanding city councils, hog-tying the hands of city managers, mayors and other officials charged with the well-being of their respective municipalities and re-negotiating or nullifying any contract.

For those of you pressed for time, Rachel Maddow lays it out succinctly in her video piece entitled Michigan Emergency Managers: the most under-reported story of the year. For the rest of you, I got off my soapbox for most of this article and behaved as a journalist should.

Vodpod videos no longer available.
Rachel Maddow: Mich Emergency Manager: The most under-reported story of the year, posted with vodpod

First on the block: Benton Harbor.

In MCL 141.1501 the act spells out the whys and wherefores of the Emergency Managers act revised, 2011. Joseph L. Harris was appointed to Benton Harbor, Berrien County Michigan. WJSM reported the following on April 15, 2011 of Harris’s actions the previous evening;

“Harris had issued an order on Thursday stating that the elected leadership of the city may no longer hold votes on any matter, other than to start a meeting, adjourn a meeting, and approve a meeting’s minutes. Issuing such an order is allowed under Michigan’s recently updated emergency financial manager law, and this is the first time an EM has actually used that authority. Harris could also suspend the city commission altogether, but he told us previously that he wasn’t planning to take that step.”

The apparent reason Harris did not take the next step is outlined in the Emergency Manager City of Benton Harbor Berrien County Michigan order no.: 11-32 which details Harris’ re-writing of the Benton Harbor city charter.

Next on the block: Flint

Chris Savage (aka Eclectablog) reported on December 6th, 2011 the following;

I said that he was “essentially firing the the Mayor and City Council”. This is 100% true. He cancelled all future City Council meetings until further notice, eliminated their benefits and stopped paying them. That’s firing the city government, no matter how you slice it.

Those actions taken by the Flint Emergency Manger Michael Brown are what field crisis mangers like to call “escalation.”

Pontiac acquired Emergency Manager Lou Schimmel in September.  He previously served in the same capacity in Hamtramck and Ecorse. One of his questionable actions was to outsource policing to Oakland County.

And then there is Detroit

Detroit Public schools Emergency Manager Roy Roberts took over in May, 2011. This sets the precedent in real time, of putting every public teacher and employee, in jeopardy of loosing their job. It also puts the retirement packages of every current and former school system employee in jeopardy as well.  Remember the Emergency Manager has the ability to re-negotiate or nullify existing contracts, including those of retirees. In that light, let us look at a financial fact regarding the cost to the taxpayers of the state of Michigan.

Parents have been concerned for their children’s safety for years in Detroit; however Emergency Manager Roy Robers has no such concerns. According to a report by channel 7 Action News (ABC) reporter Ross Jones on December 8, 2011:

“For the first eight months of the year, district police officers racked up more than $80,000 just in overtime to protect Roberts and his predecessor Robert Bobb. Bobb left the district earlier this year.

Roberts’ two guard routinely work long nights that sometimes stretch into the next morning.  They even provide weekend protection.  On a Saturday in October, one guard’s day started at 7 AM, and didn’t end until 12 hours later.  He wasn’t alone. Roberts’ second security guard was working that Saturday, too.  He didn’t leave until 12:30 the next morning—logging almost 17 hours of overtime.”

U.S. House Representative John Conyers has finally weighed in. According to David Shepardson/ Detroit News Washington Bureau who filed a report two days ago, Conyers asked U.S. Attorney General Eric Holder to review the constitutionality of the Emergency Mangers. From the article by Shepardson:

“Conyers, the top Democrat on the House Judiciary Committee, sent a letter Dec. 1 to Holder asking him to review whether the state’s emergency manager law is constitutional and to intervene, if necessary, to block it. ‘(Holder) told me he got the letter and he’s going to act on it.'”

And finally, Mayor Dave Bing who has been tasked with cleaning up the mess former Mayors Colman Young and Kwame Kilpatrick made of the already ailing city of Detroit;

“I didn’t come into this position to be an emergency manger. I was voted in to be mayor, but I do think the team that we have, including myself, are the best team that we can put in city government to get us out of this situation today.” Johnathan Oosting, MLIVE Friday December 9, 2011

As an independent journalist, I will continue to beat the drum for public awareness and direct action on this issue until those Occupiers in Michigan: Lansing, Grand Rapids, Traverse City, Midland, Bay City, Saginaw, Clair, St Ignace, Mackinaw City, Escanaba, Monroe, Detroit, Jackson, Ann Arbor, Muskegon, Lake Shore, St Joseph, Grayling, Alpena and my hometown of Rochester wake UP and stand UP to Gov. Snyder to say NO! to the existing Emergency Managers as well as all future plans to preserve any type of EM in this state.

To the rest of the country:

Senator Sanders is working on an amendment to overturn Citizens United ruling. This is what we have said we want, sign the petition and help re-define people as people, corporations as not people.

Interested in Tim Pools new toy the Occto-copter? Read about the benefactors involved in this awesome new technology. From the blog:

The Occupy Wall Street movement gained an unbelievable amount of ground since its inception; spreading worldwide, gaining international attention, and drawing thousands upon thousands of people into the streets to acknowledge a corrupt system and demand a change. Of course, no movement—especially one with so many far-reaching ideas and, at times, unclear focus, is without its skirmishes. The Occupy movement’s relationship with police departments has often seemed strained at best; an “urban guerilla war” at worst. 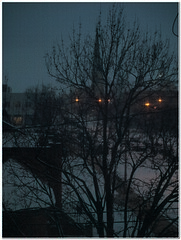